Being a mother to 5 children, Tania is excellent at multitasking, working on several projects at the same time and has 20+ years of event and coordinating experience.

Graduating with a Bachelor of Law degree in 2010, Tania has gained excellent communication and administrative skills over the years and loves to share her knowledge with anyone that’s eager to learn.

Tania enjoys socialising with friends, meeting a wide range of people, providing clients with amazing experiences and comes from a sport loving whānau. Her Dalmatian/Croatian born whanau arrived in Wairoa NZ after WW1 where her grandfather, a civil engineer, helped build the roads into Te Urewera. They relocated to Tokomaru Bay, before finally settling in Tairāwhiti. Approx 20 years ago she moved to Tāmaki Makaurau with her son Reuben, who is of Ngātiwai, Ngāti Porou and Ngāti Awa decent, and has been involved in organizing numerous large and community event,s including for Matariki in Tāmaki Makaurau.

As an events promoter, media consultant, publicist, artist/tour manager and sound engineer, whose work has taken her all over Aotearoa and the globe– to Rotorua as the promoter of the Raggamuffin Music Festival, the Pacific Islands with the group UB40, and on projects in the Waikato, such as the launch of Claudelands Arena – Leesa is looking forward to spending more time in the Waikato and connecting and reconnecting with everyone.

She would like to thank the current government for creating the first national holiday to mark the Maaori New Year, and providing funding for Maaori to make the matauranga associated with Matariki accessible for all. 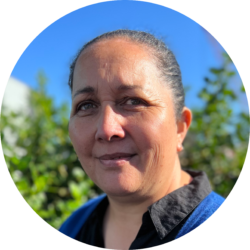 Before becoming a Trustee for Te Ohu Whakaita Charitable Trust, Te Rangi has been a key part of a number of initiatives and events such as Matariki in the City working alongside Hamilton City Council Libraries, Entertainment Suite and Mareikura Creations.

Te Rangi is passionate about Māori Art and Culture and believes that by being apart of Te Ohu Whakaita Charitable Trust she can be apart of providing a platform to connect with Iwi, Hapu, ngā Kura, Nga Whare Wānanga, ethnic and regional communities and all our Marae. Myra was born and raised in Waikato and is passionate about the wellbeing and Hauora of our Taiao, Whaanau and Communities. Hauora and wellbeing are nurtured when a society and community reflects your culture and whaanau aspirations. She sees volunteering with Te Ohu Whakaita as a privilege and opportunity to support Kaupapa Maaori events in the Waikato region. Myra is a member of Hei Ahuru Mowai- Maori Cancer Leadership for Aotearoa, Co-chair for the Clinical Equity Leadership at Waikato District Health Board and a member of The Maori Health Committee for The Royal Australasian College of Physicians. Anna was born and raised in the Waikato in the rohe of Ngāti Hauā of Irish, Scottish and English descent.

As a Community Organiser at Go Eco and Poverty Action Waikato, Anna is also a Trust Waikato and Living Wage Aotearoa Board member. Anna believes that strong cultural identity and understandings of whakapapa are vital to a thriving Waikato community. Anna is honoured to support the kaupapa of Te Ohu Whakaita. Ani has been involved in Matariki ki Waikato for over 5 years, through her role at Hamilton City Council where she works as a Community Advisor. Ani has been with Hamilton City Council since 2008 as part of the Community and Social Development team. Ani is part of the working group that leads one of the signature events being Matariki in the City, she has a large amount of experience in event management where she has led a range of community events. Ani also has a background in youth work and a wide range of knowledge in the sports sector. Born and bred in the Waikato, Maree Mills joined Te Ohu Whakaita after taking on the position as Curator Tangata Whenua at Te Whare Taonga o Waikato in 2017. From 2013 she worked at Auckland Council to project lead, and author the regions first Arts and Culture Strategy- Toi Whītiki. Prior to this she implemented a kaupapa Māori operating policy in the role of Director at Hastings City Art Gallery in Heretaunga. Maree also lectured at the University of Waikato. As a foundation member of Nga Aho, she is committed to growing Māori visibility in Kirikiriroa and sees the growth of our Matariki Festival and the vision of Te Ohu Whakaita as vital. Chairperson for Te Ohu Whakaita, Matariki Ki Waikato and President of the Friends of the Hamilton Gardens. Marleina’s role in all three groups is in relationship building and creating opportunities across sectors to strengthen communities. As a graduate from the University of Waikato with a background in Communications and Public Relations she has a proven ability to work in a team environment and to motivate and lead teams to success.

Te Ohu Whakaita is a Charitable Trust with a vision to support and facilitate events in the Waikato region that celebrate Maaori culture, Maatauranga Maaori and is inclusive of all communities under our guiding principles of whanaungatanga and kotahitanga.